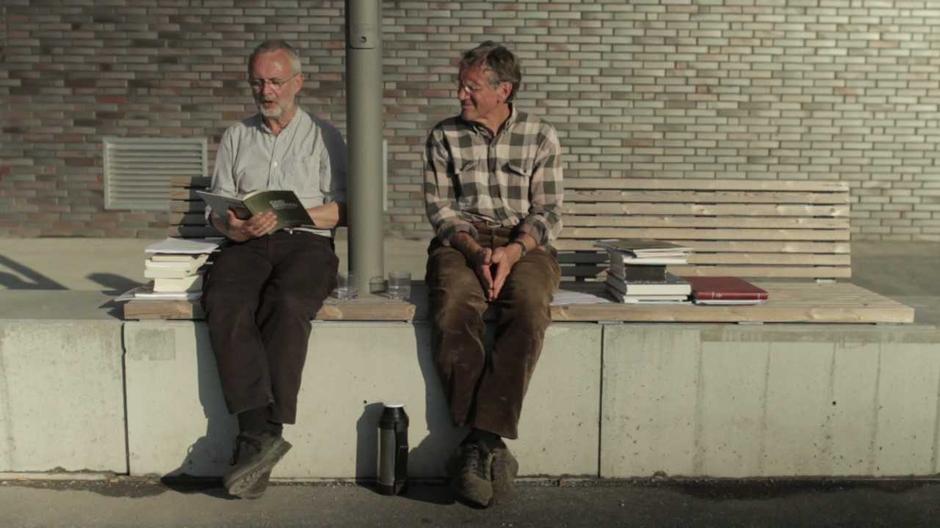 Mandag 6.august
Gunhild Enger & Jenni Toivoniemi , The Committee, 2016, 14 min.
A Nordic collaboration is taking place. Three delegates from Sweden, Norway and Finland are gathered in Lapland to decide on an art piece, which is to be placed where the three borders meet geographically. But the committee is in for a surprise. Instead of a sculpture, the commissioned artist presents his idea of a “Nordic Dance”. The delegates are faced with the true challenges of a democratic decision-making process. Is there something they can agree to be a Nordic
movement?

Tirsdag 7.august
Cecilia Nygren (SE) My dreams are still about flying, 2012, film, 32 min
MIn 1974 Werner Herzog filmed a short documentary named “Die große Ekstase des Bildschnitzers Steiner” (The Great Ecstasy of Woodcarver Steiner), which is about the best world ski-jumper back then and his fears and dreams. Almost forty years later, Cecilia Nygren found out that the Swiss ski jumper currently lives in Swedish town Falun and she decided to create a sequel to Herzog’s documentary. In the intersection of intimate interviews, archival footage and dreamlike passages, the story captures not only the memories and dreams of an elderly man, but also a reflection on the documentary genre itself and its mutations and possibilities

Onsdag 8.august
Charlotte Thiis-Evensen. (NO) Arven, 2015, 20 min
Christian has one year left to live, one year to get to know his newborn son Philip, and on year to make sure Philip will have a chance to get to know him. Heritage is a film about father and son relationship.

Torsdag 9.august
Ane Hjort Guttu, ”Four studies of Oslo and New York” 2012, 17 min
Ane Hjort Guttu’s investigation of the reality of liberal ideals in contemporary Norway is evident in her work "Four Studies of Oslo and New York". Mixing a poetic style and documentary aesthetic, the work considers recent building developments in Norway in relation to twentieth-century arguments for universal access to sunlight and fresh air. Guttu interviews two Norwegian architects, who discuss the history of sunlight in Scandinavian urban planning. In Norway, where there is from zero to six hours of sunlight a day at the height of winter, equal access to light and air was once considered a moral right. Sadly, deregulation in recent years has allowed market forces to develop buildings that reinforce class distinctions by affording sunlight to only the very rich.

Fredag 10.august
Aleksander Johan Andreassen, “Strim” 2017, 19 min
In the film Strim we join Sigrid in search of her missing cat Liv. During the search her inner monologue becomes external through movements and actions. She collides with the community surrounding her and progresses through the meetings. Sigrid is played by the dancer Sigrid Marie Kittelsaa Vesaas. The film is shot in the suburban area Groruddalen outside central Oslo.

Lørdag 11.august
Cecilie Debell (SE), My mother is pink, 2017, 75 min
The mother likes pink, the son has painted himself blue, and the pink camper van is ready for the road trip. A highly unusual family story of the really surprising kind. The performance artist, Michael Richardt and his mother, Malou are very close. But major, unanswered questions lurk beneath the surface, and Michael's expressive, flamboyant exterior conceals a hardcore family story about social inheritance. So, in the quest to understand his origins, Michael invites his mother to join him on a road trip to visit some of the key places from their past. What lies ahead is a documentary adventure packed with surprises and random, but oddly meaningful encounters with old friends and sympathetic strangers, all of who give both mother and son something they were missing. Cecilie Debell has created a moving, funny, almost disarmingly vibrant family story, in which imagination is the key word. A cinematic epistle about tolerance in an age that sorely needs it.